The Copper Scroll and the Ark of the Covenant 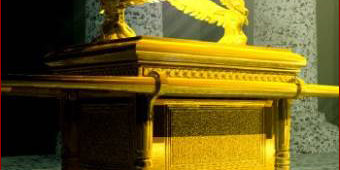 The Ark of the Covenant has not been seen since the destruction of Jerusalem by Babylonian King Nebuchadnezzar.  2600 years, however, has not been long enough to kill the curiosity or exhaust the imagination of the many who ponder the Ark’s fate.  The burning question is how something so holy and central to Jewish worship could disappear without explanation.  The Babylonian’s detailed list of stolen Temple items makes no mention of the Ark; the Bible offers no resolution on whether the Ark was stolen, lost, or destroyed.  The Copper Scroll is the first archeological discovery that sheds light on the issue and could even lead to the Ark’s recovery.

The Copper Scroll is an anomaly in the Dead Sea Scroll Collection.  Found in 1952, like the other scrolls, the Copper Scroll was found in a cave near the ruins of Qumran and was thus attributed to the Essenes.  As its nickname implies it is a scroll written on thin copper sheets.  Unlike the rest of the Dead Sea Scrolls, the Copper Scroll has no literary or religious content; it is an inventory of sixty-four obscure locations where gold, silver, and other treasures are said to be hidden.
Most scholars would deny any direct connection between the Copper Scroll and the Ark.  Admittedly, the Ark is not directly mentioned in the Scroll.  However, there is a common scholarly assumption that the contents that are listed in the Scroll came from the Jewish Temple.  The Copper Scroll describes a hoard of precious metals and coins estimated to be worth around two billion dollars today.  The only place in ancient Israel that would have had access to so much wealth was the Temple treasury.  Jews in the land and in the Diaspora had brought substantial wealth to the Jewish temple through regular free-will offerings.

In addition to temple tithes, the Scroll refers to other movable temple items like ‘dedicated vessels,’ ‘consecrated’ items, and priestly garments.  Temple vessels are referred to in at least three sections of the Scroll and priestly ephods are named once.  According to Copper Scroll expert B. Pixner, the fourth section of the Scroll references the Breastplate of the High Priest.  In the twenty-sixth section of the Scroll, the scribe uses the same Hebrew word for “pitcher” that is almost exclusively used for the Qalal, the urn which held the ashes of the Red Heifer.  Albert Wolters, a  professor of Religion and Theology in Ontario who focuses on the Dead Sea Scrolls, makes an argument that the proper translation for the last hiding place of the Copper Scroll reads “the Cavern of the Shekinah.”  Shekinah when used in the Bible designates the Divine Presence as it inhabits the Tabernacle (Exod. 40:35) and the Temple in Jerusalem.

There seems to also be a more cryptic reference in the Scroll to the Ark.  According to the translation of John Allegro, the first person allowed to study the Copper Scroll, the text opens with: “In the desolations of the Valley of Achor, under the hill that must be climbed, hidden under the east side, forty stones deep, is a silver chest, and with it, the vestments of the High Priest, all the gold and silver with the Great Tabernacle and all its Treasures.”  Mishkan is the Hebrew word used for the Wilderness Tabernacle, the Tabernacle that the Israelis carried during the forty years of wandering and the contents of which were later transferred to the Ark.

The prevailing opinion in Copper Scroll studies is that, like the rest of the Dead Sea Scrolls, the Copper Scroll dates between 150 BCE and 70 CE.  Logic would follow that the Scroll is referring to second Temple treasures secreted away before the Roman invasion.  If this theory stands, then the Copper Scroll likely has no connection to the Ark since the Ark was absent from the Second Temple.

A less popular—but no less interesting—theory is that the Copper Scroll treasure is from the First Temple and was removed by Temple guardians before the Babylonian invasion.  The scroll would likely have been hid in a cave during the Babylonian exile.  The idea that the Copper Scroll could be a precursor to the Dead Sea Scrolls has some credibility given its unique Biblical language.  The Scroll’s script and word construction has eluded many paleographers (experts in ancient script) because it is unlike any of the other Dead Sea Scrolls or texts from the suspected period of production.  Some passages have paleographic dates around 70 CE, but other passages date back 700 years earlier.

Vendyl Jones—an explorer who has devoted thirty years to studying the Copper Scroll—and Jim Barfield—a retired fire marshal who believes he has cracked the code on the Copper Scroll (see my Copper Scroll articles from the last two issues)—believe the Second book of Maccabees and two other extra-Biblical texts give the background to the Copper Scroll.

II Maccabees tells the story of the prophet Jeremiah receiving a divine warning about the Babylonian invasion to come.  Jeremiah took the sacred Temple treasures—including the Wilderness Tabernacle, the Ark and its contents, and the Qalal—and hid them in a hollow cave near Mount Nebo (Deut. 34:1).  After Jeremiah sealed the entrance his followers complained they could not find the site.   Jeremiah replied “the place shall be unknown until God gathers His people together again and shows His mercy.”

In 1922 an eighteenth century writing called Emeq HaMelekh written by Rav Hertz, an authority on oral Torah, was found in Amsterdam.  In Emeq HaMelekh, Hertz goes into detail describing the mission directed by the prophet Jeremiah to hide the Ark and other sacred things.   Hertz wrote that seven years before the destruction of Solomon’s Temple, five holy men “concealed the vessels of the Temple and the wealth of the treasures that were in Jerusalem.”  Once the guardians hid the objects they inscribed the inventory and secret locations on a Luach Nehoshet (copper plate).  Emeq HaMelekh warns that the Temple items will “not be discovered until the day of the coming of Moschiach, son of David.”

As his source, Hertz cited in his introduction a Tosefta Mishnayot (Rabbinic writing) which was unknown to modern Talmudists until twenty years ago.  In 1990 proof of the Tosephta Mishnayot surfaced in an 8th century genizah (document deposit) recovered from Cairo, Egypt.  Though the genizah document predated Emeq HaMelekh by a thousand years, it gave the same story as Rav Hertz about the Temple rescue operation, named the same five holy men, and referenced the copper plate.

Could the Copper Scroll now sitting in a museum in Jordan be the Luach Nehoshet?  The possibility is tantalizing.  Excluding Jones and Barfield, however, few Copper Scroll experts have given the connection any merit—mostly because archeologist frown upon using ancient literary texts to aid in finding artifacts.

Even still, outside of a Hollywood movie studio, never before has there been a treasure map that held this kind of promise and suspense.  The Copper Scroll may be our closest witness to the Ark’s fate.  Watch Raiders of the Lost Ark one too many times and you can not put down the sneaking suspicion that if the Ark is ever meant to be found it will be the Luach Nehoshet—not Prof. Indiana Jones—that leads us to it.