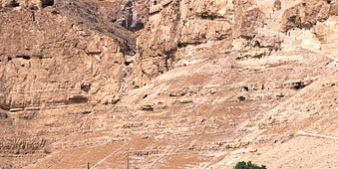 Walking past the aromatic date palms and ancient sycamores of Jericho, Jesus quietly reflected on the reality that only seventeen more miles separated him from the bitter taste of death. Later that day or the next he would top the crest of the Mount of Olives in Jerusalem to prepare for his destiny on a nearby hill called Calvary. Six miles to the east of Jericho the tired Jordan River also neared its final resting place just eight miles further south where it would empty into the buoyant, lifeless waters of the Dead Sea.

Pleased by their good fortune, the local merchants happily sold bushels of fruits and vegetables to the hungry pilgrims who jammed the main road through Jericho on their way to the annual Passover celebration in Jerusalem just beyond the mountains of the Judean wilderness to the southwest. Jericho’s alluvial soil, tropical sunshine and numerous freshwater springs made it an attractive resort oasis and winter haven for the wealthy and likewise a popular place for beggars who longed for a penny or crumb of hope to fall from the palms of the merciful.

Covered with dust from the well-traveled road, blind Bartimaeus sat in his usual spot on the outskirts of town with a garment spread before him to receive the day’s alms. Overhearing the mundane chatter of travelers, Bartimaeus suddenly realized that his ordinary day had taken a surprise turn, for he had heard that Jesus was passing that way. Desperate hearts cannot easily be deterred from doing what they must. The starving man will accept degrading work to keep his family fed. The mother of a baby with a soaring fever will pound on the door of strangers at midnight to get to a phone and call for help. The blind man will cry out for assistance from Jesus even if a crowd scolds him for being a nuisance. Bartimaeus could not see, but he still had a fine set of pipes in him, and his desperation compelled him to call out to Jesus about whom he had heard many wonderful things. No doubt Bartimaeus had been taught the prophetic promise of Isaiah, “‘Behold your God will come . . . . He will come and save you.’ Then the eyes of the blind shall be opened” (Isaiah 35:4-5). Bartimaeus believed that Jesus had come as Israel’s Messiah, and Jesus, responding to the heart-sight of the beggar, touched him and said, “Your faith has made you well” (Mark 10:52). Or more literally, “Your faith has saved you,” just as Isaiah had predicted that the coming Messiah would do. After receiving the healing touch of his Savior, Bartimaeus joined all those who followed Jesus up to Jerusalem “with singing, with everlasting joy on their heads” (Isaiah 35:10).

Leaving Jericho today on Highway 417 for Jerusalem you will see no church or historical sign that marks the spot where Bartimaeus might have sat, calling out in desperation to Jesus. Instead you will see children playing soccer, mothers headed for the market or a businessman offering camel rides for a few shekels. Tired lives, desperate hearts. But nothing could keep the desperate blind man from his Savior—not the rebuke of the crowd nor the demands of cleaning up after a hurricane. Not the duties of motherhood nor the pressures of a full-time load in college. Nothing. Desperate hearts cannot easily be deterred from doing what they must.

Let us too live desperate lives. Let us allow nothing to keep us from our Savior—to keep us from being with him, from studying his word, from worshipping him with others. Don’t be deterred by the tug or the teasing of the crowd. Cry out to Jesus. He will hear your cry. “He will come and save you.”