Interview with Jim Barfield about The Copper Scroll Project 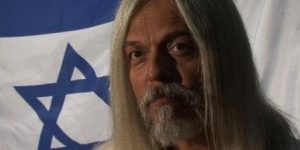 Jim Barfield, a retired fire marshal from Oklahoma, believes he has cracked the code on The Copper Scroll.  Applying his arson investigation skills to the world’s most intriguing antiquities, he has achieved something that for four decades has eluded all other archeological and paleographical experts.  Barfield has shown his research to the Israel Antiquities Authority (IAA) and they have given him a permit to conduct an expedition this winter.

I met Barfield—or Jimmy B as his friends call him—at a pro-Israel conference in Dallas.  Amazed by the possibility of his locating the sites of ancient temple tithes, I have been following his story for three months and have had the chance to conduct several interviews with him and his family.  Whether or not Barfield has solved this ancient mystery is yet to be proven, but after hearing his story you can’t help but think the same God who chose a young shepherd-boy to be King of Israel and an exiled Jewish girl to be Queen of Persia, would also hand-pick an Oakie fireman to restore to Israel the sacred temple treasures.

NEESE: What exactly is the Copper Scroll?BARFIELD: The Copper Scroll, found near the Dead Sea in Israel in 1952, is literally a copper metal document approximately seven feet long listing about sixty locations of very large amounts of gold, silver, and gems from the time of Moses and from the time of King Solomon.  I don’t like to call it a treasure map because these items are holy but essentially it’s a map listing buried treasure.

How did you get interested in the Copper Scroll?

How did you get access to the Copper Scroll?

It wasn’t very difficult.  It’s called the internet.  Anyone can go online and get a facsimile of the Copper Scroll.

There are several different translations of The Copper Scroll.  Which translation did you use for your research?

I used the Martinez translation as a guideline but then I did my own word for word rendering of the text using a Strong’s Concordance.  Not too fancy but this allowed me to simply read the text for what it was: a verbal map.  I know probably people could debate my qualifications for doing this and they are more than justified.  But if the sites prove to be right then no one is going to care about how I translated it.

Do you believe the Copper Scroll is pointing to first or second temple items?

I believe the scroll is from the first Temple period.  These things were hidden when the Babylonians were knocking at the door of Jerusalem.  The Second Book of Maccabees and a seventeenth century book called Emeq HaMelekh (“Valley of the King”) tell the story of the prophet Jeremiah who with the help of five Temple guardians carefully hid the holy objects of the Temple to protect them from the Babylonians.  One was named Shimur Halevi and two of the others you’ve probably heard of: the prophet Zechariah and Haggai.  Emeq HaMelekh says after the items were hid the locations were written on a copper plate.  It is very easy to detect four different handwritings in the scroll.  The first guy hid fourteen items.  The second guy hid twenty three; he worked his bottom off.  The third hid eighteen.  The fourth guy hid only five items but he did something so cool to direct you to the last site that is just over the top.

The places mentioned in the Copper Scroll seem to be very specific, speaking of people and locations that are unknown to us today.   How do you know where these random wells, pools, and cisterns are located?

It was far simpler than that.  That’s the reason why others have not been able to locate these items.  They apply too much knowledge and try to make the Copper Scroll fit their preconceived theories.  I simply took what the scroll said and began to narrow things down by a process of elimination.  Just like in an arson investigation, I try to eliminate all the fringe factors by trying to prove whether or not someone is innocent.  In the case of the Copper Scroll I took the descriptions of the sites and matched them up with the data on the ground.  I matched up the fingerprints.

The Copper Scroll is a detailed list of at least sixty locations.  Have you identified all sixty of those locations?

Fifty-six of the sites I am almost positive on and four of them I am a bit shaky on.

There are several people who have spent their lives trying to understand the Copper Scroll.  In locating the sites was there anyone whose previous research laid the groundwork for you?

Vendyl  Jones has done wonderful research on the history of the scroll and I agree with him completely on the history.  On the translation and locations though we don’t quite see eye to eye.

How many times have you been to Israel?

I have been there four times in the last two years.  I had never been before my Copper Scroll research.  After I identified the first twenty sites in the scroll, my wife and I got on a plane and went to Israel by ourselves to check the sites and make sure that I wasn’t just going crazy.  When I got there I checked all the measurements, came back with the data, and figured out the rest of the locations within six months.  By June 22, 2007 I had completed my report and went back to Israel.  I met with the right people and things went fantastic after that.

The last time I went to Israel was in September.  We met with the Israeli archeologist who will be leading the dig and actually went out to the sites.  He asked me where I wanted to start and I said I want to start at the buried cave, the last place mentioned in the scroll and the most important.  There is another scroll inside of that cave—“the Silver Scroll”—that will complement the directions in the Copper Scroll.  When we find that one we’ll get another fireman to come and figure out the Silver Scroll!

How did you get a meeting with the Israeli Antiquities Authority to show them your research? I was teaching a class at Comanche College and met a sweet lady named Juanita.  She just so happened to have sponsored in the 1970s an Israeli named Shuka Dorfman who was doing some training at Fort Sill.  They kept in touch and he became the director of the IAA.  She called him up and said “Shuka, I have someone you need to meet.”  I went to Israel in December 2007 and met with him at the Citadel Hotel in Jerusalem.  At first he thought I was a nut but I hadn’t shown him the first five locations before he was on the phone with his top archeologist saying “you’ve got to see this.”  He set up the meeting for me to meet with the archeologists at the Rockefeller Museum in Jerusalem.

Was it difficult getting the permit?

The archeologist from the IAA who has agreed to do the dig is the guy who grants permits.  There is normally a stack of paperwork you have to do to even apply for a permit but I did zero.

Did the Israeli experts question your credentials?

I’m sure they did at first.  But once the experts see the research they just thump their heads and move me to the head of the class.

Who else is working on the Copper Scroll Project with you?

My buddy Chris Knight is my number two man in command.  I had to have someone I trusted and Chris is that guy.  Chris is dedicated to our Father in heaven and has a heart for Israel.

My wife Laurie could give this interview for me.  She’s heard it all so many times.

Has anyone dug where you are pointing to before?Not exactly.  None of the locations have actually been dug to the level that would require a discovery.  They have come awful close though.  It would be silly for me to say though that in the last 2,000 plus years these things haven’t been looted.

Is there a finder’s fee if these things are located?

I’m not a treasure hunter and I have no thoughts for wealth.  I just want to do what God wants us to do.  If this is right then God gave this to a guy that just doesn’t give a darn about wealth.  My grandchildren love God and I want it to stay that way.  What matters most to me is what my children and grandchildren will say about me when they are gathered around…

Have you been hard to live with since you first cracked the code?  I imagine it’s taken a lot of patience to wait out the expedition date.

In the beginning I stayed awake at night thinking about everything.  There were times that my wife just wanted to give me a shovel and tell me to go dig.  But now that we are getting closer I have been sleeping soundly.  A lot of prayer and fasting though.

How long do you expect the first expedition to take?

I’m thinking for the first site, if we dig slow, would only take a couple of days.  This won’t be a normal expedition.  We are not talking about brushing off broken pottery shards with paint brushes.  These are holy vessels and billions of dollars worth of gold and silver.

What do you think could happen if the contents of the scroll are found?

I better be wearing depends that day!
But seriously if these things are found it could change the world.  I just want to be there when the sites are opened.  What Israel does with the items after that is up to them.